$14.99
DISCOUNTS Chlp offers discounted shipping when you buy items together

Andromeda: Season 1, Collection 1 - Episode 101-105 Dvd added to cart. Only one available in stock 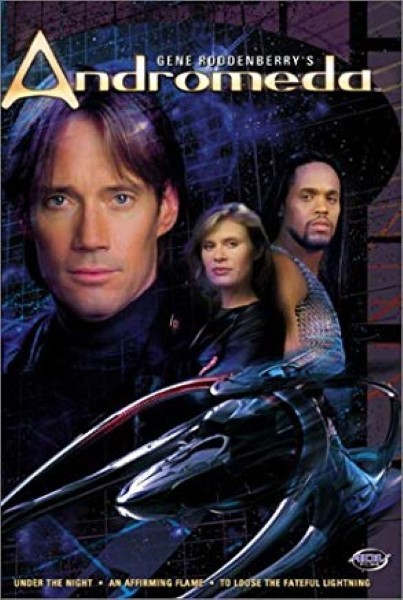 Based on an idea by Gene Roddenberry, the syndicated series Andromeda confidently wears its debt to Star Trek on its sleeve, recalling the best sci-fi of Roddenberry's heyday. The two-part premiere "Under the Night" and "An Affirming Flame" makes for a terrific introduction to the lead character, Captain Dylan Hunt, played by Kevin (ex-Hercules) Sorbo. He's a sympathetically flawed idealist in command of the Andromeda Ascendant, a massive starship of the now-disbanded Systems Commonwealth. The fall of civilization has meant that although she ought to be a relic, she remains the zenith of technological advancement.

In the first of these five episodes, we see Captain Hunt in battle against 10,000 enemy ships, winning a bout of fisticuffs with a close friend turned enemy traitor, wrestling with the shock of being frozen in time for 300 years, and then diplomatically negotiating his way out of a salvage rights battle for his ship. The Andromeda Ascendant's emotionally driven, lifelike computer is desired by the Eureka Maru salvage vessel, and feisty Captain Beka Valentine can barely stop her engineer Harper from drooling about tinkering with her. The Maru's shipmates are similarly driven: Rev Bem (from another sworn enemy race) has a spiritual calling, while cutesy-pie Trance Gemini's motivations are part of her winning mysteriousness. One final addition is the show's muscle, Tyr, the enemy with a conscience, but Andromeda is Dylan's show all the way. --Paul Tonks

All used  disks are professionally refurbished and test played before shipping and will play  well in most machines.
Disc's are also repackaged (labeled refurbished) and suitable for gifts.