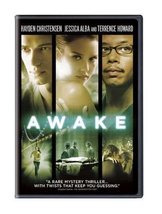 Awake Dvd added to cart. Only one available in stock 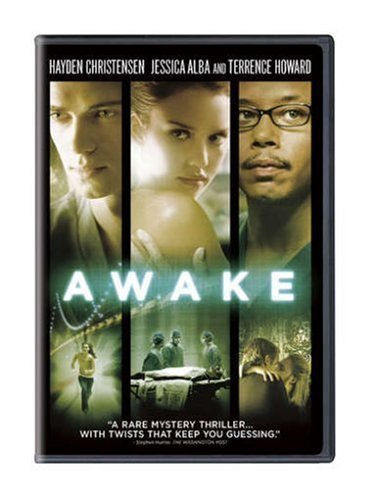 Writer/director Joby Harold's debut feature, AWAKE, is an unsettling thriller that highlights a deeply troubling medical problem. "Anesthetic awareness" is a rare but dangerously prevalent condition that affects nearly 30,000 individuals a year, in which patients who have been put under anesthesia before surgery remain paralyzed while still being aware of their present situation. AWAKE tells the story of Clayton Beresford Jr. (Hayden Christensen), a successful young businessman who lives under the roof of his overbearing mother, Lilith (Lena Olin). Afraid to expose his engagement to Lilith's beautiful assistant, Sam Lockwood (Jessica Alba), Clayton decides to do so when he realizes that, thanks to a rare heart condition, he might not live much longer. His best friend and personal surgeon, Jack Harper (Terrence Howard), supports his decision to take the plunge, and also advises him to get a much-needed heart transplant as soon as a donor is found. After he marries Sam, a donor arrives, but when Clayton is put under to receive the complicated surgery, he is shocked to discover that he's still cognizant of everything that is happening to him. As he fights through the pain to hear the doctors' voices, the more he learns about his best friend and his new wife, adding further trauma to an already horrendous situation. Featuring standout performances from the film's principal cast (Christensen, Alba, Howard), as well as its supporting players (Olin, Fisher Stevens, Christopher McDonald), AWAKE is a tense journey through the mind of an innocent man who's on the verge of losing his lease on life