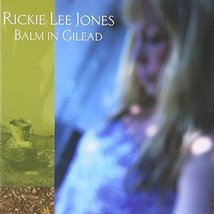 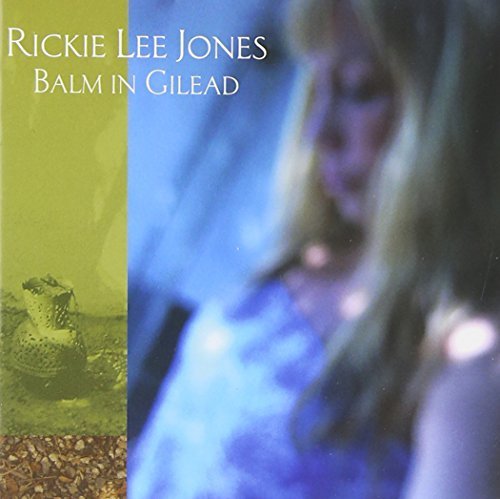 " That has GOT to be Rickie Lee Jones' middle name! Throughout her 30 year career, she has been absolutely fearless, always unafraid to try something new. Heck, in the last decade alone, she's bounced from 2000's hit and miss covers album IT'S LIKE THIS to 2003's sdgier, angrier EVENING OF MY BEST DAY, then back to 2006's brilliant (and polarizing; people seemed to either love or hate it!) concept disc, THE SERMON ON EXPOSITION BLVD.

Now she's back with BALM IN GILEAD, her most structured, straight-ahead album in years. This is the disc fans of Jones' debut album, PIRATES and THE MAGAZINE have been waiting years for. Pretty much every song has a beginning, a middle and an end, while Jones' vocals are crisper, cleaner and more focused than they've been in ages. For me, the great thing about BALM IN GILEAD is that, while it's going to make old school fans VERY happy, it's still quirky enough to keep fans of the Geffen years (and beyond) smiling.

Kicking things off is the ebullient "Wild Girl", a song Jones wrote for her daughter on the eve of her 21st birthday (However, upon hearing the lyrics "Wild girl, you must have been a terror/When you were young", you can't help but wonder if there's also a tiny bit of an autobiographical vibe at play here!). Strong vocals, a relaxed arrangement and clever lyrics ("But it wasn't very nice/Eating all that sugar and spice/What they want a girl to be") add up to an instant classic. VERY nice!

"Old Enough" is a sweet duet with Ben Harper. Punctuated by popping horns, both lead vocals weave in and out, blending in a way that is so rare in duets nowadays. There's a give and take here that is just stunning! Toss in some killer keyboard fills (both piano and organ), and you have a track that is smooth, playful, melodic and sweet. Without a doubt, Jones' best duet since "Between A Laugh & A Tear", her masterful pairing with John Mellencamp on his SCARECROW album.

Up next is the country-tinged "Remember Me." If you didn't know better, you would swear this was a decades-old Nashville standard, vs. a Rickie Lee Jones original. Bolstered by Vic Chestutt on harmony vocals and Alison Krauss' (as always) stellar violin, a cut that could have been pure camp shines bright and true.

The same can be said about the jazzy "The Moon Is Made Of Gold." Written years ago by Jones' father, this could have turned into a piece of total kitch, but it actually works. The elder Jones had a nice, simple way with a lyric, while the arrangement has a cool big band groove to it (Amazingly, the instrumentation is totally stripped down, consisting of just rhythm and lead guitars and upright bass, yet it's full-bodied and lush). A very unassuming, yet captivating, number.

Some people might have a problem with "His Jeweled Floor", but I love it. With it's layered vocals and Old World hymn-like vibe, the song fills the room with a celestial calm. Minimal, yet meaty, this is the sort of out-of-left-field track that BALM needed right about now to add a little bit of an edge (Can't have people thinking Rickie Lee was mellowing out too much now, can we?!?).

"Eucalyptus Trail" is really the only song that doesn't work for me. Plodding and lacking of any energy whatsoever, the track is unfocused and underdeveloped. Worst of all is Jones' vocal...spiritless, droning and lacking any color at all, this is the album's only real misstep, but believe me, it's a doozy!

"The Blue Ghazel" is an instrumental that probably would have worked better on SERMON..., but it's actually a nice little addition here as well. Part jazz, part rock, part sound effects, the song is the kind of understated interlude that doesn't really take things to another level, but it does allow for a nice stretch. Once again, some will love it, some will hate it. I'm in the former camp!

Things revert back to "normal" with "The Gospel Of Carlos, Norman And Smith." A killer lead vocal from Jones, minimal (yet heartfelt) instrumentation, sterling harmony vocals (courtesy of Chris Joyner) and powerful lyrics ("When hope is the color of a man/The color of love is the color that can/Stand for something") all come together perfectly. Another winner.

"Bonfires" is one of the most achingly beautiful songs that Jones has ever penned. Supported only by her own guitar playing, her plaintive vocal washes over the heart-tugging, universal (everyone's been here!) lyrics ("You hurt me bad this time/You nearly tore me from my mind/Before I knew I had been hurt/She laid her hair across your shirt"). Honest, evocative, real....things don't get much better than this!

"Bayless St." could've easily been recorded on a street corner in a small provincial French village; it has that kind of intimate, warm vibe. All guitars and mandolins and accordian-esque organ, the track is down right charming, from start to finish. Anchored by a lead vocal that is both dreamy and a tad bit girlish, you have the perfect ending to an already super strong effort.

It's going to be interesting to see where Jones goes from here. BALM IN GILEAD is a definite nod to her past, but I can't see her staying there. In fact, by looking back on this project, I'm betting we'll see a very different Rickie Lee Jones on her next release. And there's something both exciting and comforting in that knowledge. You might even say soothing...you know, as in a sort of BALM! (As with all my reviews, I'm giving the disc an extra half a star for including the lyrics)."