Beauty Shop Dvd added to cart. Only one available in stock 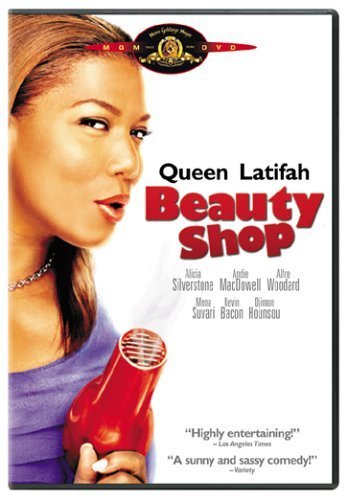 Gina Norris (Queen Latifah) is a widowed hairstylist who has moved from Chicago to Atlanta so her daughter Vanessa (Paige Hurd) can attend a private music school. She's made a name for herself as a stylist, but after her self-centered boss, Jorge (Kevin Bacon), criticizes her decisions, she leaves and sets up her own shop, purchasing a run-down salon by the skin of her teeth by helping out a loan officer.

Upon buying the salon, she runs into instant barriers: loudmouthed young stylists, older clients who are fixed in their habits, an energetic young boy named Willie (Lil' JJ) who constantly flirts with women (including Vanessa) while filming for his next music video, people wary of her ability as a hairdresser, and the constant trouble her rebellious sister-in-law, Darnelle (Keshia Knight Pulliam), finds herself in. Gina issues an ultimatum with Darnelle to clean up her act and start paying her back or she will be evicted. In a short time, the previous owner's clients become her own and many of her former customers find their way from Jorge's to her salon. When electrical issues arise, she finds that the upstairs renter, Joe, is a handsome electrician from Africa who eventually bonds with Vanessa due to his skills on the piano. Because Jorge is jealous that his shop is losing clients to Gina's, he pays a health inspector named Crawford (Jim Holmes), to find various ways to shut down Gina's business.

You thought you'd heard it all in the barbershop, but you haven't heard anything yet - the women get their own chance to shampoo, shine, and speak their minds in Beauty Shop.