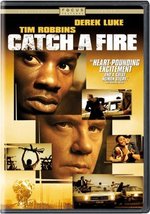 Catch a Fire Dvd added to cart. Only one available in stock 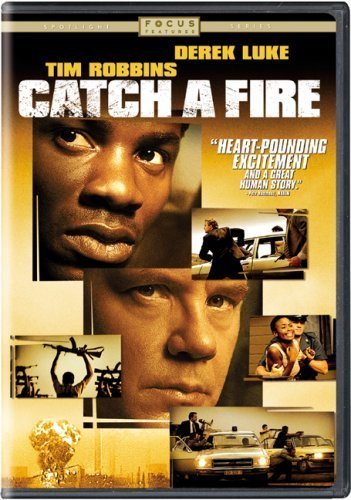 Catch a Fire
Set in early 1980s Apartheid-era South Africa, CATCH A FIRE is a gripping political thriller based on a remarkable true story. Derek Luke (ANTWONE FISHER) stars as Patrick Chamusso, a family man who works as a foreman at the Secunda oil refinery. Although he tries his best to stay out of politics, he is dragged in when Colonel Nic Vos (Tim Robbins) wrongly believes that Chamusso is a prime suspect in a terrorist bombing that occurred at the plant. Despite being brutally beaten and tortured, Chamusso continues to declare his innocence, but the situation changes drastically when the Police Security Branch brings in his wife, Precious (Bonnie Henna). Faced with some hard choices, Chamusso starts listening to radio broadcasts by the illegal African National Congress, an organization of freedom fighters seeking to end apartheid, and decides it's finally time to fight back. Vos and Chamusso, both dedicated to their families as well as to their very different causes, play a relentless game of cat and mouse, symbols of the intense battle between blacks and whites that blew up in horrific violence right before apartheid ended. Robbins and Luke are both excellent in complex and difficult roles, and there's a breakout performance from South African actress Henna. Director Phillip Noyce (RABBIT-PROOF FENCE, THE QUIET AMERICAN) and screenwriter Shawn Slovo (whose father, Joe Slovo, was a white leader of the resistance movement) researched the story thoroughly, resulting in a powerful, realistic drama. CATCH A FIRE was filmed on location in South Africa, Mozambique, and Swaziland, and features traditional, folk, and protest songs by the Bongani Singing Group, Sidikadika Ndlovu, Ras Michael and the Sons of Negus, and Bob Marley, among others.
dvd79-00036-vg
All used  disks are professionally refurbished and test played before shipping and will play  well in most machines.