Chaos Theory Dvd added to cart. Only one available in stock 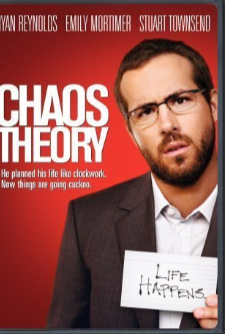 Frank Allen is a professional speaker who lectures on time management. He lives by example: perfectly maximizing his efficiency through scheduling and planning his own life down to the minute. He dearly loves his wife, Susan, and their young daughter, Jesse.

On the day of an important seminar that could be his major break on the corporate lecture circuit, Susan changes their clocks by 10 minutes, to give him time to run a meaningless errand for her on this important day, but she moves them the wrong way. From missing the ferry to the career-damaging fact that he then arrives late to his lecture on time management, Frank experiences an off day. He loves his wife so much that, when the beautiful Paula crashes his hotel room, strips down and jumps on him, Frank excuses himself and heads home in the middle of the night.

While driving home through the night he sees a pregnant woman, Nancy, having contractions and gives the stranger a lift. At the hospital, Frank is asked to fill out some paper work. Rattled by his off day, he mistakenly puts his own information down and the nurses at the hospital assume he is the father.

Before Frank arrives home, a nurse from the hospital calls attempting to reach "the father". Susan instantly believes it is Frank's baby and that he is cheating on her and leading a double life. When Frank arrives home, she refuses to let him clear up the misunderstanding and throws him out of the house within moments. Her reaction through the next few days remains over the top, refusing to talk to Frank and only allowing him to see Jesse after school.

Left with no choice but to provide scientific proof to Susan, Frank sees a doctor for a paternity test, but receives the diagnosis that he was never able to reproduce to begin with, since he has Klinefelter's syndrome. The undeniable truth about Jesse and, thus, Susan's own infidelity devastates Frank - but also explains why Susan so instantly presupposed that Frank was a cheater, treating him with unforgiving disdain and refusing to let him even try to clarify the situation.