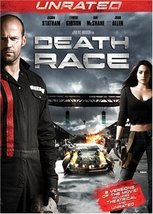 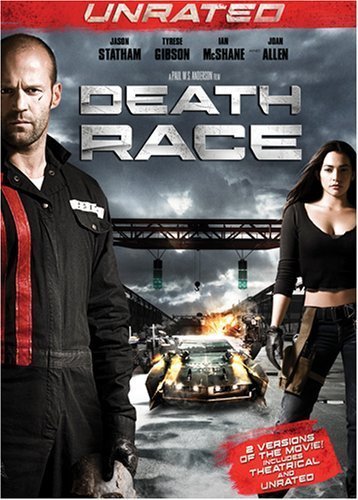 The Roger Corman-produced cult favorite DEATH RACE 2000 (1975) gets an update in this reworking from action director Paul W.S. Anderson (RESIDENT EVIL). In a role sure to please fans of his work in CRANK (2006) and the TRANSPORTER films, Jason Statham is Frankenstein, the fierce driver portrayed by David Carradine in the original. The script, also by Anderson, largely does away with the original's satirical elements in favor an increased number of breathtaking crashes and stunt driving. In 2012, the American economy has collapsed, and prisons have been taken over by corporations. Overseen by Warden Hennessey (Joan Allen), Terminal Island prison generates immense amounts of revenue with pay-per-view broadcasts of "Death Race," in which inmates participate in an auto race where anything goes. New inmate Jensen Ames (Statham), who has been framed for the death of his wife, is chosen to take over the role of Frankenstein, the contest's recently deceased masked star driver. His chief competitor, Machine Gun Joe (Tyrese Gibson), unaware that a new man is behind the mask of his old rival, will stop at nothing to win. With Case, a sexy navigator from the nearby women's facility, and a trusty pit crew led by wise veteran Coach (Ian McShane), Ames has a good shot at winning. If he does, he's been promised his freedom---but the race holds more obstacles than he can imagine, and ratings are more important to Hennessey than being true to her word. Loud, gory, and lightning fast, DEATH RACE is geared to the video game generation, right down to the graphics that appear onscreen during the race's TV broadcast. Once again, Statham creates a great hero to root for in a performance that rises above the copious stunts and visual effects. Allen, in uncharacteristic role, is suitably imposing as the steely warden.