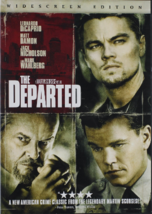 Departed Dvd added to cart. Only one available in stock 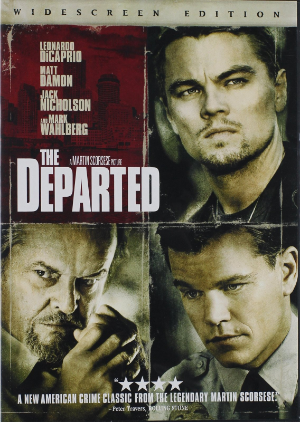 As a child, Colin Sullivan is introduced to organized crime by Irish-American mobster Frank Costello in the Irish neighborhood of South Boston. Over the years, Costello grooms him to become a mole inside the Massachusetts State Police. Sullivan is accepted into the Special Investigations Unit, which focuses on organized crime.

Before graduating from the state police academy, Billy Costigan is recruited by Captain Queenan and Staff Sergeant Dignam to go undercover, as his family ties to organized crime make him a perfect infiltrator. He drops out of the academy and does time in prison on a fake assault charge to increase his credibility.

Each man infiltrates his respective target organization. Sullivan begins a romance with police psychiatrist Madolyn Madden. Costigan sees her as a condition of his probation, and they begin a relationship, too. After Costello escapes a sting operation, each mole becomes aware of the other's existence. Sullivan is told to find the "rat" and asks Costello for information to identify the informer.

Costigan follows Costello into a porn theater, where Costello gives Sullivan an envelope containing personal information on his crew members. Costigan chases Sullivan through Chinatown. When it is over, neither man knows the other's identity. Sullivan has Queenan tailed to a meeting with Costigan on the roof of a building. Queenan orders Costigan to flee while he confronts Costello's men alone. The men throw Queenan off the building to his death. When they exit, Costigan pretends he has come to join them. Television news reveals that crew member Delahunt has been an undercover cop, working for the Boston Police Department. Dignam resigns rather than work with Sullivan. Dignam suspects Sullivan is the mole after Dignam asks Sullivan why he had Queenan followed.

Disk has been professionally refurbished and test played before shipping and will play well in most machines. Disc's are also repackaged (labeled refurbished)