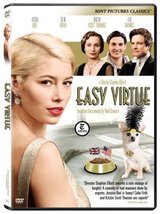 Easy Virtue Dvd added to cart. Only one available in stock 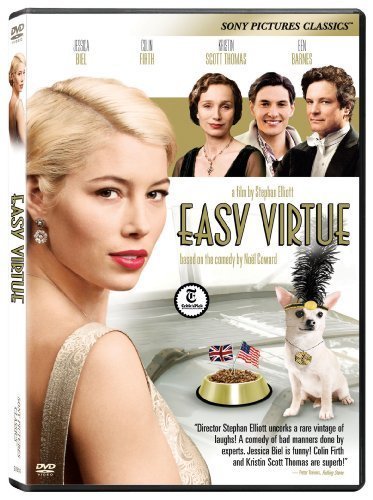 Adapted from a Noel Coward play, EASY VIRTUE is essentially a tale of Old World manners vs. New World freedom. The year is 1929, and John Whitaker (Ben Barnes) has just married a feisty American racecar driver named Larita (Jessica Biel). John is the eldest of the Whitakers--a prim English family--and when he returns home with Larita on his arm, his mother (Kristin Scott Thomas) is none too pleased. John's choice of a loud, brash American has raised everyone's eyebrows, including his sisters, Hilda (Kimberly Nixon) and Marion (Katherine Parkinson). The only person who seems to approve of Larita is Mr. Whitaker--John's weary, put-upon father (Colin Firth). Try as she might, Larita has a hard time impressing the icy, unforgiving Mrs. Whitaker, and indeed, the entire Whitaker clan proves to be a rather eccentric, unhappy bunch. John had promised Larita a short visit, but due to pressure from his mother, they stay longer than planned. Time drags on, and the friction between Mrs. Whitaker and Larita only gets worse. When Hilda digs up something scandalous from Larita's past, tensions bubble to a boiling point, and Larita is forced to face some rather hard truths about herself and her new husband.For fans of period films, EASY VIRTUE is a visual treat, set on a sprawling country estate and with gorgeous and impeccable costumes. Director Stephan Elliot (THE ADVENTURES OF PRISCILLA, QUEEN OF THE DESERT) tries to inject a bit of modern zing by filling scenes with contemporary renditions of Cole Porter songs, while Biel and Scott Thomas breathe some life into their lightweight characters. Though the source play, with its airy plot, isn't one of Coward's most popular works, fans of Colin Firth's work in costume comedies and dramas will be delighted with the actor's performance here.