Honeymoon In Vegas Dvd added to cart. Only one available in stock 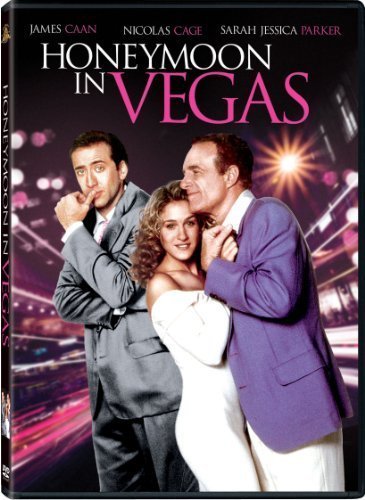 Private Detective ("Private eye") Jack Singer (Nicolas Cage) swore to his mother on her deathbed that he would never marry. His girlfriend, Betsy (Sarah Jessica Parker) wants to get married and start a family, and he proposes a quick Las Vegas marriage. They check into the Bally's Casino Resort.

Before the wedding, however, a wealthy professional gambler, Tommy Korman (James Caan), notices Betsy has a striking resemblance to his beloved late wife, Donna. He arranges a crooked poker game (with Jerry Tarkanian as one of the other players) that prompts Jack to borrow $65,000 after being dealt a straight flush (7-8-9-10-Jack of clubs), only to lose to the gambler's higher straight flush (8-9-10-Jack-Queen of hearts); Tommy offers to erase the debt in exchange for spending the weekend with Betsy.

After Tommy agrees to no sex, the desperate couple consent. Jack discovers that Tommy has taken Becky to his vacation home in Kauai. The gambler asks his taxi driver friend, Mahi Mahi (Pat Morita) to keep Jack as far as possible from him and Betsy. Jack discovers this, steals the taxi. He sees Betsy outside the Kauai Club where he is attacked by Tommy and arrested. Jack's dentist friend, Sally Molars (John Capodice), bails Jack out of jail. Mahi Mahi meets Jack outside and admits that Tommy left for Las Vegas with Betsy and has convinced her to marry him. Mahi races Jack to the airport. Betsy decides she cannot go through with the wedding and escapes from Tommy.

Meanwhile, after changing many planes and finding himself stuck in San Jose, Jack tries frantically to find a flight to Las Vegas. He joins a group about to depart for Las Vegas but discovers mid-flight that they are the Utah chapter of the "Flying Elvises" – a skydiving team of Elvis impersonators. Jack realizes he has to skydive from 3,000 feet to get to Betsy. Jack overcomes his fear. He lands and spots Betsy, ruining Tommy's plans.

Jack and Betsy are married in a small Las Vegas chapel with the Flying Elvises as guests. Jack is wearing a white illuminated jumpsuit and Betsy in a stolen showgirl outfit.