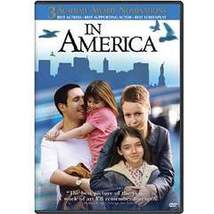 In America Dvd added to cart. Only one available in stock 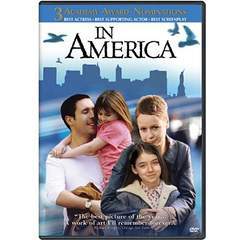 In America Dvd
Jim Sheridan's autobiographical film, IN AMERICA, begins as Irish immigrants Johnny (Paddy Considine), his wife Sarah (Samantha Morton), and their two daughters drive their wood-paneled station wagon across the Canadian border and into the United States. As they enter New York City at night, 10-year-old Christy (Emma Bolger) records the lights, skyscrapers, and general excitement on her camcorder. Her little sister Ariel (Sarah Bolger) coos at all there is to see, and the whole family is filled with new hope. With no money to live on, they settle into the top floor of a flophouse tenement inhabited by transvestites and drug addicts. The dilapidated building is at first intimidating, but with a little redecorating and a change of perspective, the family turns it into a bohemian paradise. While Johnny goes to auditions, trying to get his break as an actor, Sarah works at the ice cream shop down the street and the girls go to Catholic school. A budding friendship with their ominous neighbor, Mateo (Djimon Hounsou), brings a much-needed spirituality to the family's happy but difficult struggle to survive. A beautiful and touching film about the risks that families take striving for a colorful, successful, happy life, IN AMERICA is above all a tribute to New York City in all its glory: its diversity of people and opportunity, its violence and grit, and its sometimes overwhelming energy.
dvd52-0009-vg-bon
All used  disks are professionally refurbished and test played before shipping and will play  well in most machines.
Disc's are also repackaged (labeled refurbished).