It's Called a Breakup Because It's Broken: The Smart Girl's Break-Up Buddy

It's Called a Breakup Because It's Broken: The Smart Girl's Break-Up Buddy added to cart. Only one available in stock 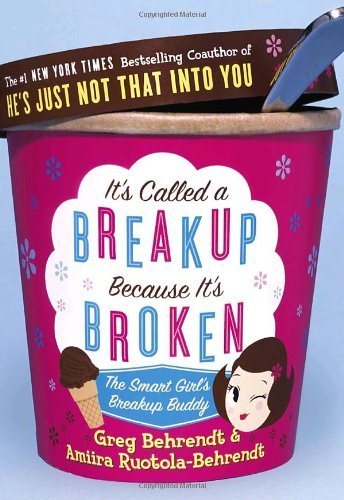 It's Called a Breakup Because It's Broken: The Smart Girl's Break-Up Buddy

There's no doubt about it--breakups suck. But in the first few hours or days or weeks that follow, there's one important truth you need to recognize: Some things can't and shouldn't be fixed, especially that loser who dumped you or forced you to dump him. It's over for a reason, and deep down inside you probably know what that reason is. It's called a breakup because it's broken, and starting today, you're not the kind of woman who settles for broken, or hangs on to damaged goods, be it a radio, a pair of shoes, or a relationship. It's time to get rid of all the broken stuff you've been lugging around for days, months, and maybe even years, and make the bold decision to start looking for stuff that works Because the longer you stay stuck in a dead-end relationship, the less time you get on this planet to experience a great one. So open up this book, and let's dive in--our goal is to help you turn your breakup into the event that changes your life for the better in ways you never dreamed possible. The co-author of the smash two-million copy bestseller "He's Just Not That Into You," Greg Behrendt knows that the one thing harder than realizing he's not that into you is finding the courage to walk away from the relationship. But Greg and his co-author and wife, Amiira, also know that there's a flip side to every breakup: As dark as everything seems right now, this could be the single best thing that's ever happened to you. "It's Called a Breakup Because It's Broken" is the ultimate survival guide to getting over Mr. Wrong and reclaiming your inner Superfox. From how to put yourself through "he-tox," to how to throw yourself a kick-ass pity party, Greg and Amiira share their hilarious and helpful roadmap for getting past the heartache and back into the game. They give advice on: …