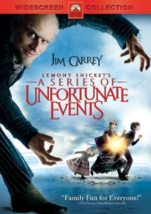 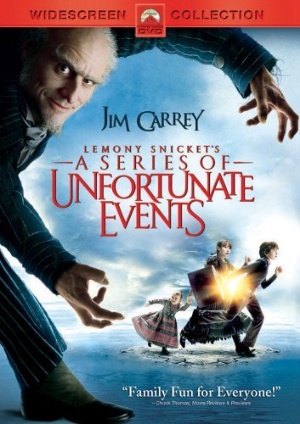 A Series Of Unfortunate Events Dvd

Directed by Brad Siberling, LEMONY SNICKET'S A SERIES OF UNFORTUNATE EVENTS follows the Baudelaire orphans--Violet (Emily Browning), Klaus (Liam Aiken), and baby Sunny (played by twins Kara and Shelby Hoffman)--as they are followed by the wicked Count Olaf (Jim Carrey). A distant relative and an awful actor, Olaf is determined to claim the fortune willed to Violet, Klaus, and Sunny, whose parents died in a mysterious fire. Enigmatic author Lemony Snicket (Jude Law) recounts the adventures of the three children as they change hands from the conniving Olaf to the reptile-loving Uncle Monty (Billy Connolly) to Aunt Josephine (Meryl Steep), who lives in fear of just about everything.An adaptation that condenses the first three books in the series--THE BAD BEGINNING, THE REPTILE ROOM, and THE WIDE WINDOW--into one installment, the film captures the darkly humorous tone of the popular children's novels by Lemony Snicket (AKA Daniel Handler). Carrey clearly has fun with his intentionally over-the-top role as the villain, while the young actors embody their resourceful characters wonderfully. The true star of the film, however, may be the production design of Rick Heinrichs (SLEEPY HOLLOW), which creates a visually stunning world filled with gothic mansions and ramshackle houses. By keeping the heart of the eccentric books intact, A SERIES OF UNFORTUNATE EVENTS proves to be an usually inventive and quirky Hollywood film.