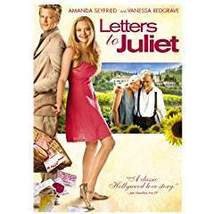 Letters to Juliet Dvd added to cart. Only one available in stock 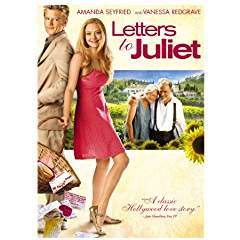 Letters to Juliet
In Verona, Italy the beautiful city where Romeo first met Juliet there is a place where the heartbroken leave notes asking Juliet for her help. It s there that aspiring writer Sophie finds a 50-year-old letter that will change her life forever. As she sets off on a romantic journey of the heart with the letter's author, Claire, now a grandmother, and her handsome grandson, all three will discover that sometimes the greatest love story ever told is your own.

Letters to Juliet succeeds in being just what it's meant to be, a feel-good romantic comedy about love lost and love found, in which love triumphs in the face of cynicism. Inspired by the book of the same name, and filmed against the beautiful backdrop of Verona, Italy, the movie tells the story of how troubled young women seek advice from Shakespeare's Juliet by leaving letters tacked to a wall, where they are carefully answered by Juliet's self-appointed "secretaries." One such note is found 50 years later by Sophie (Amanda Seyfried), a young American woman who is soon to be married and who yearns to become a writer. Her heartfelt answer to the letter serves as a catalyst for an epic romantic journey that will span continents and generations. The success of the film lies in the powerful interaction between the wistfully romantic and fully mature author of the letter, Claire (Vanessa Redgrave); the romantically idealistic Sophie; and Claire's overly pragmatic, downright cynical grandson Charlie (Christopher Egan), who grudgingly accompanies his grandmother on what he deems an insane quest to Verona to find her long lost love, Lorenzo. The filmmakers, writers, and actors all capitalize well on the comic possibilities of the situation, and there are more than a few good chuckles to be had at the absurdity of the interactions between these three very different characters, as they experience everything from hope and longing to disappointment and unexpected fulfillment. In the end, each character grows and changes profoundly as a result of their shared journey. Sure, the events portrayed in the film are highly unrealistic, but that doesn't change the fact that the film speaks to that innermost part of us all that, despite all logic, makes us want to believe that true love really does exist and that it just might triumph in the end. --Tami Horiuchi