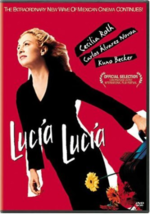 Lucia, Lucia Dvd added to cart. Only one available in stock

Filmmaker Antonio Serrano, who made a splash with his first film Sexo, Pudor y Lagrimas, returns to the screen with this thriller from Mexico. Lucia (Cecilia Roth) is a woman whose life is thrown into chaos when her husband suddenly disappears without a trace. As Lucia searches for a clue to his whereabouts, she discovers evidence that suggests her husband had a dangerous secret life he never shared with her, and she finds she isn't the only person with an interest in finding him. Lucia, Lucia (originally released under the title La Hija del Canibal) also features Carlos Alvarez-Novoa and Kuno Becker.