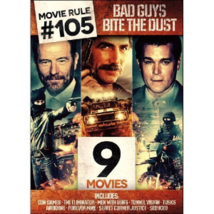 Movie Rule #105: Bad Guys Bite the Dust Dvd added to cart. Only one available in stock

An undercover inmate discovers the twisted crimes of a deranged guard (Eric Roberts) and must fight for his life when his cover is blown. Co-starring Martin Kove.

Dakota Varley (Bas Rutten) enters a boat race to cover his debts. But instead of becoming a big winner, he becomes a contestant in a lethal game.

Gabriel's (Cristos) wife and son have been murdered, and when the jury fails to convict the killer, this vengeful father must seek out his own justice.

In a thrilling story of obsession and jealousy, a cabana boy (Joseph Fiennes) and a powerful politician (Ray Liotta) violently compete for the love of a beautiful woman.

A former cop (Marc Singer) unleashes his own brand of justice in a community overrun with dangerous gang activity. Co-starring Bryan Cranston.

A dead body, a sultry affair and a detective (Sam Elliott) with his own dark secret redefine seduction in this heart-pounding thriller.

A convicted poacher (John Rhys-Davies) with a malicious past faces off against an activist who despises him and his former associate-turned-game warden.

When an elite Mach One team leader is accused of being a double agent, he must clear his name and apprehend the mastermind behind the sabotage. Starring Sean Bean.

Best friends Eddie Goldman and Richard Lucas are small-time hustlers who unexpectedly land in a set-up.