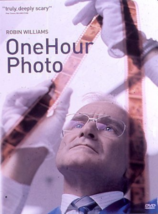 One Hour Photo Dvd added to cart. 5 available in stock 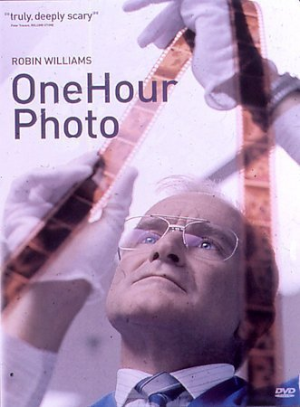 Seymour "Sy" Parrish (Robin Williams) is a photo technician at a one-hour photo in a big-box store. He is a perfectionist, lonely and consumed by his work.

Sy's favorite customers are the Yorkin family, whose photos he has developed for many years. He has grown obsessed with the family, enshrining them in his home with their photos that he secretly copies. He is shy and socially inept however, and his attempts to become closer to the family are gently rebuffed.

Sy eventually manages to spark a connection with Nina Yorkin (Connie Nielsen) when he pretends to be interested in a book that he saw her purchase. Nina learns that Sy lives a solitary existence, something only her son Jake had considered previously.

The next day, Sy is fired after his boss Bill (Gary Cole) discovers that Sy's machine has printed many more prints than have been ordered and paid for, as well as for spacing out on the job, taking 90-minute lunch breaks, giving Jake a disposable camera free for his birthday, and for an altercation in public with the "Agfa Guy", who performed maintenance on the developing machine.

While inspecting his photos for the last time, Sy discovers that Will Yorkin (Michael Vartan) is having an extramarital affair, and his idyllic conception of the Yorkins as the perfect family is shattered. Sy surreptitiously places the photos of Will and his mistress, Maya Burson (Erin Daniels), into a packet of photos that Nina was scheduled to pick up.

Sy follows and takes pictures, paparazzi style, of Bill's young daughter, and sends them to Bill as a threat. Yoshi, another SavMart employee, discovers the pictures and turns them over to Bill, leading to a police investigation against Sy.

While detectives Van Der Zee (Eriq La Salle) and Outerbridge (Clark Gregg) discover Sy's obsession, Sy confronts Will and Maya during a rendezvous in their hotel room. Armed with a knife and a camera, Sy forces the lovers to pose naked in sexual positions while he takes pictures of them. After the confrontation, Sy sees that the police have arrived at the hotel and he escapes through an emergency exit. The exit door trips an alarm and Van Der Zee pursues him while Outerbridge discovers Will and Maya, physically unharmed but emotionally traumatized. The police apprehend Sy in the parking garage. Upon being arrested, Sy claims, "I just took pictures."

Van Der Zee asks Sy why he terrorized the Yorkins. Sy says that he can tell Van Der Zee is a good father who would never take "disgusting, sick, degrading pictures" of his children, suggesting that Sy's own father exploited him for child pornography. Sy then asks for the pictures that he took at the hotel, which Van Der Zee described as "evidence." They appear to be only shots of objects and furnishings of a hotel room. The film closes with an imagined family picture of the Yorkins with Will's arm around a smiling Sy.