Oxygen Dvd added to cart. Only one available in stock 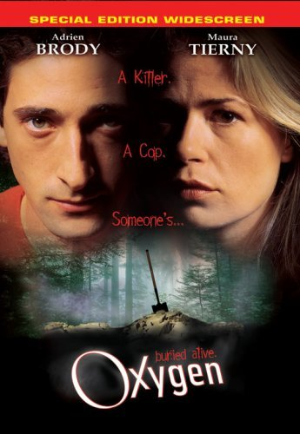 "Harry Houdini" has kidnapped and buried alive a rich businessman's wife. He demands $1 million in cash from the woman's husband in return for the release of the location of her burial site before she runs out of oxygen. He also states that if police involvement is initiated, he will ensure she is never found alive. As expected, however, police involvement is initiated and Detective Madeline Foster is assigned with the task of finding the buried woman as soon as possible, together with catching Houdini.

It is quickly realized though that Houdini, in fact, wanted the police to get involved so he could commit a second kidnapping - that of Foster. When Houdini is finally caught as the result of a car chase involving him and Detective Foster, he embroils her into his terrifying psychological world as she attempts to get him to reveal the location of his buried victim. When Foster's initial interrogation of Houdini proves unsuccessful, the FBI are assigned to take over the case, although they do not have any more luck. In a plot twist, it is revealed that Houdini has already committed a murder, that of his accomplice. He now has nothing to lose and the police realize the death of the buried woman would not be as significant as first thought.

However, Houdini offers them a final lifeline - if he is allowed to talk to Detective Foster, alone, he will allow his victim to be recovered alive. The police, now just puppets in Houdini's plan, give into his request and Foster is again embroiled in a psychological adventure of self-discovery with Houdini at the helm. Troubled, Foster begins to reveal her darker side to Houdini and he sees a kindred spirit in her. Just when she thinks she is getting through to him, Houdini persuades her that they are more alike than she ever imagined.

Captivating wait till you see the ending. I have watched this movie over and over again!