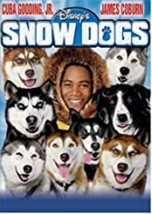 Snow Dogs Dvd
Make no bones about it -- Disney's SNOW DOGS is a hilarious, action-packed comedy your whole family will love. Eight adorable but mischievous dogs get the best of dog hater Ted Brooks (Cuba Gooding, Jr.) when he leaves his successful Miami Beach dental practice for the wilds of Alaska to claim his inheritance -- seven Siberian huskies and a border collie -- and discover his roots. As Ted's life goes to the dogs, he rises to the occasion and vows to learn to mush with his inheritance. Totally out of his element, he faces challenges he's never dreamed of. There's a blizzard, thin ice, an intimidating crusty old mountain man named Thunder Jack (James Coburn), the Arctic Challenge Sled Dog Race that's only two weeks away, and a life-and-death rescue. This fish-out-of water, tail-wagging comedy is nothing but doggone good fun and a celebration of family -- both human and canine!|According to producer Jordan Kerner, the weather on location in Alberta, Canada, was tougher than he expected. "I've worked on cold movies before -- THE MIGHTY DUCKS movies were shot in Minnesota. But you really don't know what cold is until you're out in a snowstorm with the wind blowing 50 miles per hour and it's 30 below." The only ones having a great time, Kerner says, were the dogs!|The movie stars Siberian huskies D.J. (as Demon), Floyd (as Mack), Shadow (as Diesel), Tika (as Duchess), Speedy (as Scooper), Koda (as Yodel), Buck (as Sniff), and border collies Fly and Dash (doubling as Nana).|Director Brian Levant felt right at home with his canine cast -- he has six dogs of his own.|An animatronic pooch from Jim Henson's Creature Shop was used in sequences where the filmmakers needed the dogs to have facial expressions.
dvd96-00035-vg
Disk has been professionally refurbished and test played before shipping and will play  well in most machines.
Disc's are also repackaged (labeled refurbished) .
Ws or Fs