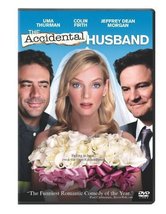 The Accidental Husband Dvd added to cart. Only one available in stock 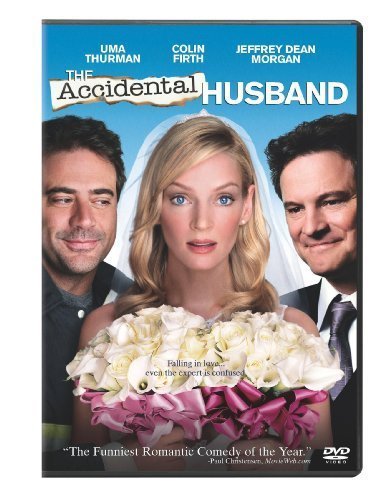 Firefighter Patrick Sullivan (Jeffrey Dean Morgan) finds his life turned upside-down when his fiancée suddenly calls off their pending nuptials per the recommendation of radio love guru Dr. Emma Lloyd (Uma Thurman). Determined to get back at this "love doctor," Sullivan forges a fake marriage license, "accidentally" marrying him to Emma,who's already engaged to Richard (Colin Firth). But as Patrick's charms begin to wear Emma down, she must decide which of these bachelors is her "Mr. Right." Also starring Sam Shepard, Justina Machado and Isabella Rossellini in this romantic comedy that proves even the experts need to learn a few love lessons now and then.
Doctor, heal thyself! That's the wry message underscoring the charming romantic comedy The Accidental Husband, which features Uma Thurman as Emma, a radio "love doctor" who can't quite seem to manage her own love life off the air. The cast is splendid, led by Thurman, who has rarely gotten to show her comic chops, and who really is very funny and has a gift for physical comedy as well. The two bachelors whose lives are accidentally (on purpose?) entangled with hers are played by two dreamboats, Jeffrey Dean Morgan (rugged firefighter Patrick) and Colin Firth (her fiancé, Richard). The chemistry between Emma and both suitors is crackling and captured well on film by director Griffin Dunne. Thurman, Morgan, and Firth are joined by a supporting cast every bit as spot-on as they are: Sam Shepard, Brooke Adams, Isabella Rossellini, Sarita Choudhury, and Keir Dullea, each of whom brings his or her own quirks and charms. The Accidental Husband is very much in the mode of Four Weddings and a Funeral and the Bridget Jones films--which is to say, make a date with it for your next date night. --A.T. Hurley
dvd29-000037-vg
All used  disks are professionally refurbished and test played before shipping and will play  well in most machines.