The Mirror Cracked by Agatha Cristie

The Mirror Cracked by Agatha Cristie added to cart. Only one available in stock 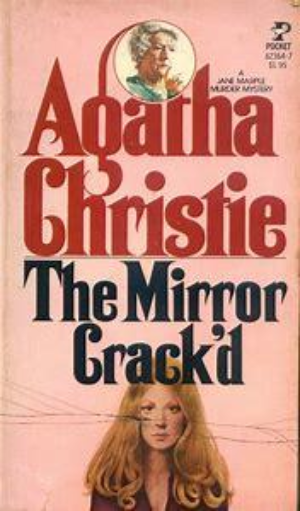 The Mirror Cracked by Agatha Cristie

As she recovers from an illness, Miss Marple goes out for a walk in the new housing development in St Mary Mead. After taking a fall, she meets Heather Badcock. Mrs Badcock tells Miss Marple her own teen-aged story of meeting the famous actress Marina Gregg in Bermuda.

The film star lives locally now, in Gossington Hall. Dolly Bantry had sold the Hall, retaining one cottage for herself, and Gregg and her husband Jason Rudd are the most recent owners. The local fete for the charity St John Ambulance takes place on the grounds of the Hall, and selected guests are invited into the Hall to meet Miss Gregg and have a picture taken of the meeting. Mrs Badcock meets her and shares her own story of meeting the actress years earlier in Bermuda, where she got the actress's autograph. Shortly after this conversation, Mrs Badcock spills her cocktail; Miss Gregg offers her own drink. Mrs Badcock dies in minutes after swallowing the cocktail. The coroner reveals Heather died as a result of ingesting six times the recommended dose of the antidepressant Calmo. Because Gregg handed her own drink to Mrs Badcock, investigation is directed both to the dead woman and to Gregg, who may have been the intended target.

Dolly tells Miss Marple that Marina Gregg had a strange look on her face as Mrs Badcock spoke to her; it recalls for Dolly the poem about the Lady of Shalott, who had an expression as if "doom has come upon her." Dolly recalls that there was a reproduction of a famous painting of the Madonna and child where the guests stopped to meet the movie star.

The party included film star Lola Brewster and Ardwyck Fenn, surprise guests from America. The photographer for portraits of Gregg with each guest is Margot Bence of London. All are questioned by the police.

From their interviews, police learn Marina Gregg's past. She had many husbands, adopted three children and then had one son who was born mentally disabled. Early in the pregnancy for her only child, Marina contracted German measles. The three adopted children were moved on to other homes when Marina became pregnant. She is happy with her present husband.