The New Guy Dvd added to cart. Only one available in stock 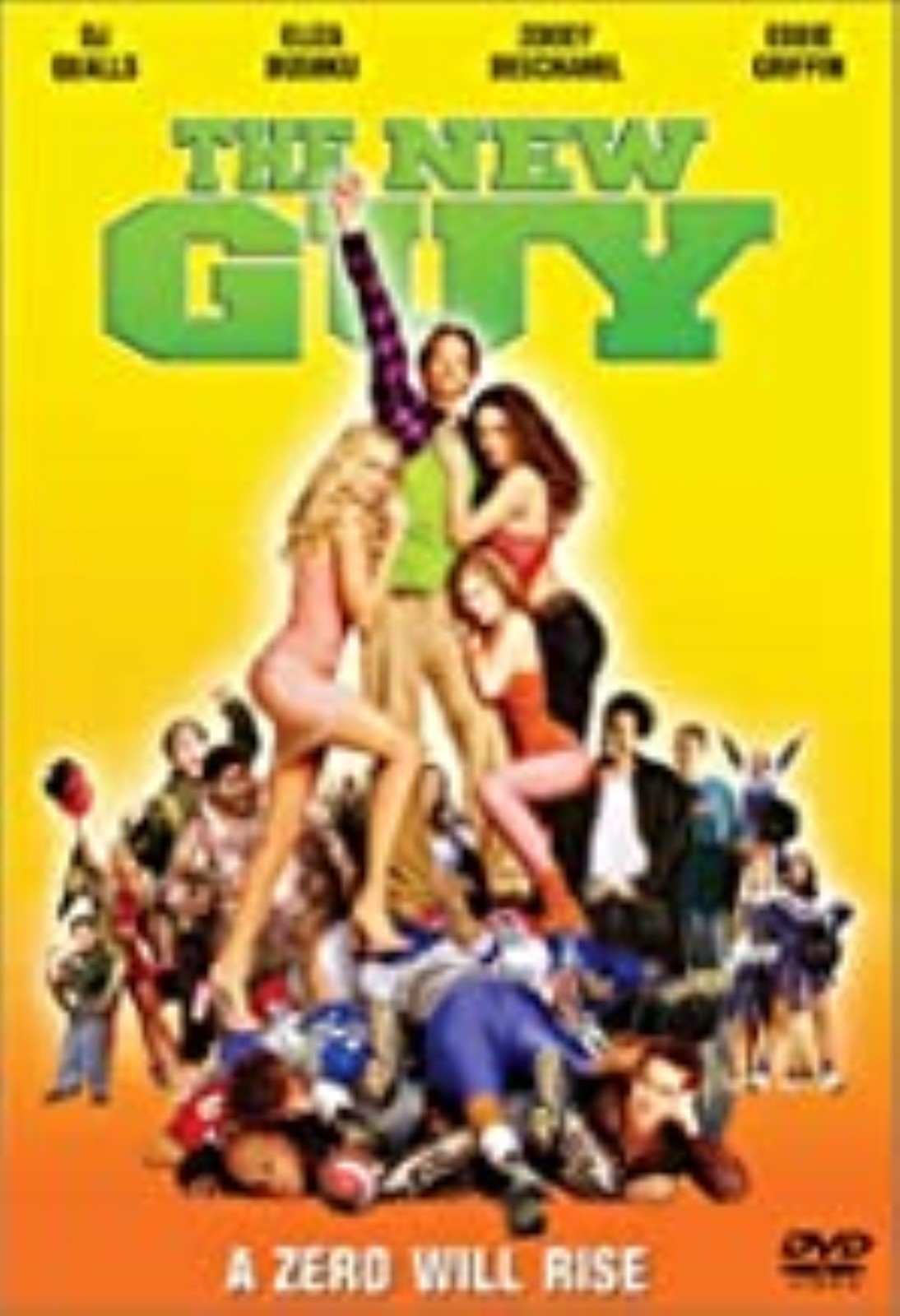 The film begins with prison inmate Luther speaking directly to the camera to an unseen individual, telling the story of Dizzy Gillespie Harrison, an 18-year-old nerdy high school senior in Austin, Texas. Dizzy is friends with Nora, Kirk, and Glen, who together started a funk rock band called "Suburban Funk" and are addicted to video games. They attend Rocky Creek High School, where Dizzy is picked on by everyone, especially star football player Barclay. After sex symbol Tina Osgood touches his arm, causing him to have an erection and embarrassing him as the jocks belittle him, his white briefs were yanked from underneath his pants and placed around his head.[3] The school librarian "breaks" his penis after Dizzy refuses to "hand" over the "weapon" to her. Dizzy is misdiagnosed with Tourette's syndrome; he is then placed on medication by the school counselor who advises his father to spend every moment possible with him. While at the mall's food court, the heavily-medicated Dizzy makes a fool of himself at a church revival and gets arrested.

In jail, Dizzy meets Luther, who turns out to be a sympathetic ex-victim who makes it his goal to teach him how to be cool.[3] In an attempt to wipe the slate clean, Dizzy gets himself expelled from his old high school, then undergoes a makeover with the help of the prison inmates and guards.[2] Changing his name to "Gil Harris", he enrolls at East Highland High and makes an impression by being dropped off in a prison van in restraints and beating up the school bully, Connor.

The action has the intended effect, and head cheerleader Danielle welcomes the newcomer to school. Her friend Courtney invites Dizzy to a party and through a mishap, Dizzy gives Courtney the impression that he has blown her off. Using a photo given to him by the prison inmates and help from his old friends, Dizzy manages to escape the party with his reputation intact. Upon returning home, however, he finds his father has agreed to sell his house and quit work to supervise him, which results in the pair living in a trailer.

Danielle asks Dizzy to encourage the school to go to see the football team play, Dizzy, referencing General Patton and Braveheart, gives an impassioned speech, inspiring the team to win their first game in years. He is soon enlisted by the coach and principal to plan the school's homecoming dance, and becomes imbued with school spirit, shedding his bad boy image. Danielle breaks up with Connor and starts dating Dizzy.

However, Dizzy and Gil are fast becoming too big for one body. When Nora berates Dizzy for becoming the same person he once hated, he uses his newfound popularity to confront Connor. Dizzy and Danielle spur the students to reunite, and the lines dividing the different cliques are broken. With a new philosophy, the school football team wins more games and bullying becomes a thing of the past. Reaching the state championship, where they play Rocky Creek, Dizzy's antics on the sideline cost Rocky Creek the game, although Barclay recognizes his old punching bag. East Highland High celebrates and Dizzy and Danielle have sex. At school the next day, Barclay attempts to beat up Dizzy, and is in turn attacked by the entire student body. After the attack, Connor helps up Barclay from the ground, telling him he wants to know what he knows about Dizzy.

The homecoming dance, which Dizzy's funk band is supposed to play, is crashed by the students of Rocky Creek. Barclay and Connor, who have joined forces to set a trap for Dizzy, play an embarrassing video of the librarian incident. However, Luther and the other inmates arrive to save Dizzy, tying up the two bullies. Nora admits longstanding feelings for Glen, and Danielle reveals to Dizzy that she was also a nerd growing up. She forgives him for hiding who he was and they kiss.

Luther ends the film, and the man he is talking to is revealed to be David Hasselhoff. In a mid-credits scene, Dizzy and Danielle mount a horse and ride off into the sunset together.
Disk has been professionally refurbished and test played before shipping and will play  well in most machines.
Disc's are also repackaged (labeled refurbished) .
Ws or Fs