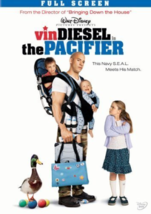 The Pacifier Dvd added to cart. 2 available in stock 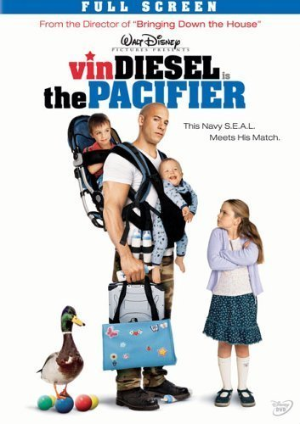 U.S. Navy SEAL Lieutenant Shane Wolfe is assigned to rescue Howard Plummer, a man working on a top-secret government project, from a group of Serbian rebels. Shane and his team successfully get Plummer off an enemy boat. However, while boarding the helicopter to escape, the team is attacked by the enemy. Plummer is killed, and Shane spends two months in the hospital. Wolfe's commanding officer, Captain Bill Fawcett, is assigned to escort Plummer's widow, Julie, to Zurich, where Plummer's safety deposit box has been discovered. Shane is assigned to stay at the Plummer residence in Bethesda, Maryland, to search for the secret project called GHOST and look after the family's five children: Zoe, Seth, Lulu, Peter, and baby Tyler. The kids prove to be difficult to handle, even with the help of nanny Helga, who quits when one of Zoe and Seth's pranks intended for Shane goes wrong. Shane eventually begins to discover the children's problems and resolve them, gaining their trust.

Later, the school's vice principal, Duane Murney, informs Shane that Seth has cut and bleached his hair, has a Nazi armband in his locker, and has skipped every wrestling practice for a month. At home, Seth tells Shane he only joined the wrestling team because of his father. After Seth sneaks out of the house, Shane follows him to the town theater, where he learns that Seth has secretly joined an amateur production of "The Sound of Music". The director quits as he believes the show will be a failure. Shane volunteers to take charge of the show, take care of the house, give Zoe driving lessons and teach Lulu and her fellow Firefly Scouts martial arts to defend themselves against rival boy scouts.