The Rancher's Runaway Bride: Men of Glory (Harlequin Superromance No. 739)

The Rancher's Runaway Bride: Men of Glory (Harlequin Superromance No. 739) added to cart. Only one available in stock 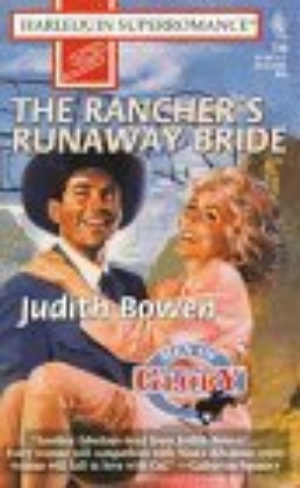 The Rancher's Runaway Bride: Men of Glory (Harlequin Superromance No. 739)

Cowboys and socialites do not have the habit of mingling in the same crowds, but Judith Bowen decided to give the mix a try. Combining the two obviously proves to be quite a trial because the main characters of The Rancher's Runaway Bride are definitely not of the normal varieties. But who can say what is normal these days? Nina O'Shea is stuck in Glory until her car is fixed, at least it was her car when she came into this sleepy little town. By the time she leaves, however, it will be someone else's car that she's just delivering. At least, that's the story she gives the good-looking cowboy who asks to join her for dinner. Why shouldn't she create a fictitious life? She won't ever see him again after she leaves. To Cal Blake, Nina is the answer to his problem. His ranch is in good shape, his life is nothing to complain about, but his family and close friends seem to think he has a problem with women. In particular, they are starting to think he won't ever get married. In steps Nina looking like a model and behaving like a girlfriend on his arm, charming his aunt Lou and amazing his lady-killer brother. Nina is touched when Cal sheepishly asks her to pretend to be his girlfriend for a day at the ranch. Unfortunately, she finds herself elaborating a bit too much on her story, and the next thing she knows she has reinvented her entire life. By the time she and Cal part as friends promising to write each other, she has made up her mind to carry on this little charade. Besides, he probably won't write anyway. When the letters do come and the correspondence becomes something she treasures, Nina finds herself wishing she hadn't lied to Cal about her life. When he proposes and she accepts, still without telling him the truth, she finds herself living a life of both love and misery, wondering where the secrets, and their future, will take them. This is a contemporary romance based on pure fantasy. Nina constructs a make-believe world for herself and Cal. But Nina is not the only one living in a fantasy. Cal contributes to this rare paradise by believing there is no way a beautiful, successful woman would ever give up a city life to live on his ranch. When the fantasy world crumbles away, they are left exposed and raw with nothing but their love to mend their hearts.Judith Bowen tries her hand at tying love knots between a cowboy and a dreamer. Things can't get worse for these two lovers...until you turn the page! A romance with all the chaos it can handle! Tender and traumatic! A man with heart and a woman with imagination-a mix made for romance.Karen Ellington -- Copyright © 1994-97 Literary Times, Inc. All rights reserved -- From Literary Times