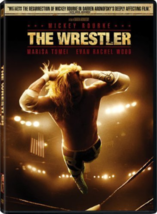 The Wrestler Dvd added to cart. 4 available in stock 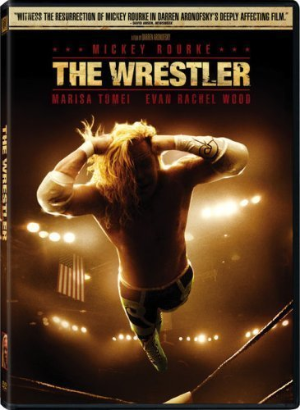 At first glance, Darren Aronofsky's THE WRESTLER may seem like a departure for the oftentimes frenetic filmmaker, and in some ways it is. When this story of a past-his-prime performer is compared to PI, REQUIEM FOR A DREAM, and THE FOUNTAIN, there is relatively little trace of psychoscientific addiction imagery, hip-hop editing, or grimly elegant peeks into dreams, nightmares, and otherworlds. Comic moments are plentiful. Aronofsky's signature close-ups of faces have been replaced with ones that force themselves into wounds inflicted for visceral spectacle. Much of the time the camera floats and bobs with an observant, almost documentary-like quietness, ethereally following the wrestler as if it were his past, and the viewer may perceive vague connections to a later, lonelier, less legitimate Rocky Balboa.But Mickey Rourke isn't the Italian Stallion--he's Randy "The Ram" Robinson, a man who has spent decades slicing himself open in choreographed fights while adoring crowds roar. Pro wrestling isn't as lucrative as it was for Randy in the 1980s, but he stays at it while working menial jobs because performing isn't just the only thing he craves--it's the only thing that, at 50, he knows how to crave. While courting his one true friend, a stripper named Cassidy (Marisa Tomei), Randy does his best to restart a relationship with the angry daughter (Evan Rachel Wood) he abandoned. But Rourke imbues the image of Randy, ready to pounce from the ropes, looking almost as unreal as the box art on action figure packaging, with an expression of pain, desperation, and joy. It's a close-up that makes two things clear. For one, Randy's charisma is inseparable from the crippling fixation that's kept him alive. For another, THE WRESTLER might be at once a simpler and more complex meditation on addiction and eternal struggle than any of Aronofsky's earlier work.