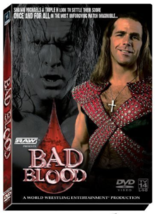 WWE: Bad Blood 2004 Dvd added to cart. Only one available in stock

Bad Blood (2004) was a professional wrestling pay-per-view (PPV) event produced by World Wrestling Entertainment (WWE) and presented by Subway, which took place on June 13, 2004, at the Nationwide Arena in Columbus, Ohio. It was the third and final annual Bad Blood event.

The main event was a Hell in a Cell match, in which Triple H defeated Shawn Michaels in a ring surrounded by a steel structure of metal. Two bouts were featured on the undercard. In respective singles matches, World Heavyweight Champion Chris Benoit defeated Kane to retain his title and WWE Intercontinental Champion Randy Orton defeated Shelton Benjamin to retain his title.

E in a Bad Blood event; the first was at Badd Blood: In Your House in 1997. Bad Blood grossed over $494,000 ticket sales from an attendance of 9,000 and received 264,000 pay-per-view buys, and was instrumental in helping WWE increase its pay-per-view revenue by $4.7 million compared to the previous year. When the event was released on DVD, it reached a peak position of third on Billboard's DVD Sales Chart.

Disc's are also repackaged (labeled refurbished) and suitable for gifts.