Winx Club: The Secret of the Lost Kingdom Movie Dvd 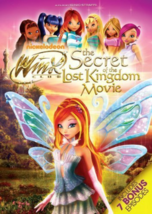 Winx Club: The Secret of the Lost Kingdom Movie Dvd added to cart. Only one available in stock 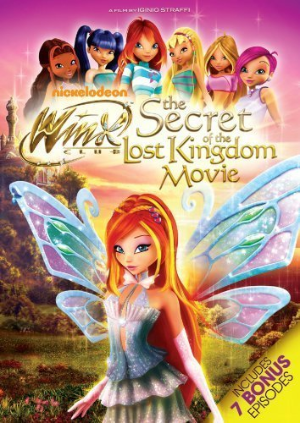 Winx Club: The Secret of the Lost Kingdom Movie  Dvd

The story begins on a snowy, foggy day. In the isolated snow peaks, a looming castle casts dark, imminent shadows on the ground.

Six cloaked figures appear, whom are none other than the Winx Club. Bloom and her friends are on a search for Bloom's birth parents, King Oritel and Queen Miriam, with Bloom's belief that they are still alive. The girls are on their way to find Hagen, a blacksmith who forged the Sword of King Oritel, a magical sword with immense power that can never be separated from its rightful master, in hopes that he can sense the sword's power and trace it to Bloom's parents. The girls successfully sneak into Hagen's castle after an easy victory over his robot guards, and come face-to-face with Hagen, who believes they are intruders. Faragonda then arrives to ease Hagen, them being old friends. They return to Alfea to discuss the matter.

Bloom begs Hagen for his help in sensing the sword's power, but he admits that he is unfortunately unable to. Spirits plummeted, Bloom feels guilty for the effort her friends have put in when it had been hopeless the whole time, and runs off in tears to avoid facing them out of shame and sadness. This is easy as most of the Alfea third-year fairies are graduating to become Guardian Fairies, after having earned their Enchantix powers. Due to Bloom's powers being incomplete, she is compelled to stay behind as she watches her friends graduate. Consoling herself with her pet rabbit Kiko and a new kitty friend named Purr, Sky comes to comfort her, encouraging her to continue her quest despite Hagen's words. They share a tender moment until a mysterious girl arrives, forcing Sky to leave in a hurry, although he promises Bloom that he will explain everything later.

The next morning, Bloom leaves for Earth to stay with her adoptive parents for the time-being. Though she seems happy, Mike can tell that Bloom is uncomfortable living on Earth, to which Vanessa agrees that she belongs more in the Magical Dimension. That night, Bloom has a dream about Daphne, who tells her that there is still hope; their parents are still alive and offers Bloom her strength. Daphne also informs her about the Book of Fate, a tome their father kept that tells the entire history of Domino, and its location.

In the morning, Bloom is surprised to see all of her friends, plus the boys, there to celebrate her 18th birthday. Not only are her spirits lifted, Bloom shares her plan and they all agree to help her, reminding her of their everlasting friendship. The restoration of Bloom's hope triggers the Sword of King Oritel, deep within the dark Obsidian Circle, the center of all Evil forces. Its glow troubles the spiritual forms of the three Ancestral Witches, the culprits behind the destruction of Domino. They employ Obsidian's Keeper, Mandragora, to root out the cause of the sword's reactivation and snuff it out like a candle, additionally imbuing Mandragora with a fraction of their dark powers.

Meanwhile, the team, lead by Bloom, head to Domino. Borrowing Daphne's mask, Bloom recalls Daphne's memories of when Domino was a paradise before it was covered with ice and snow. The group head towards the mountain where the book is hidden, but Tecna informs them of a mystical bird called the Roc that supposedly guards the library. The Specialists scale the mountain first but accidentally causes the Roc to awaken, who flies off with the boys hanging on for dear life. The girls save the boys with Musa's harmonic spells and successfully allow the Roc to land. Inside the library, they meet Bartelby, Oritel's deceased scribe in spiritual form, who shows them the Book of Fate. In it, they discover that Bloom's parents were part of a good warrior group known as the Company of Light, that served to eradicate Evil in the form of the three Ancestral Witches and that Oritel as well as all the people of Domino are currently trapped in the Obsidian Circle. However, the team finds the remaining pages empty after chronicling the Company of Light's battle with the Ancestral Witches, with no clue on the outcome. Bartelby then foretells a prophecy where six legendary warriors will save Domino, and that a king without a crown will free the Sword of King Oritel. As the team celebrates this new discovery, Riven is bitten by one of Mandragora's spy bugs and becomes her puppet.

Soon after, Alfea is attacked by Mandragora, who despite being defeated by Faragonda, Hagen, the teachers and the Winx, learns about Bloom and disappears, dutifully reporting about the second princess of Domino. Following Mandragora's defeat, the group begin searching for a way into the Obsidian Circle, which leads them to Pixie Village. With the help of Lockette, the team heads to the gateway to the Obsidian Circle. As the girls enter, Mandragora appears and forces Riven to battle Sky and retrieve the key, separating the girls and the boys. As he is about to stab Sky, Musa jumps in front of him and is injured.

The girls are forced to face their worst fears, and Bloom sees a vision of what happened to her birth parents: Oritel was pulled into the Obsidian Circle by the Ancestral Witches while Miriam absorbed herself into the sword in order to be with him. To Bloom's horror, she sees her father frozen in stone, the same fate for all inhabitants of her planet. All the fairies then wake up from their trances, only to come face-to-face with the Ancestral Witches, who severely weaken the Winx except Bloom. They force Bloom to make a choice between destroying the sword and saving her adoptive parents or taking the sword and letting Mandragora kill them, as seen in an image. Luckily, Bloom sees through the illusion and places her trust in the boys that they are still fighting Mandragora, unleashing her Dragon Fire. Outside, Riven recalls all what he and Musa have been through together. Regaining his sanity, he lifts her up and they kiss. Chasing after Mandragora, Sky then arrives moments later to aid her and takes the sword, but supposedly dies, as only a king can wield the sword.

Feeling all alone, Bloom is ready to give up when Daphne reminds her that she is not alone. Bloom wears the mask, and Daphne joins with her to destroy the Ancestral Witches. However, Mandragora returns and, using her body as a host, the Ancestral Witches begin to strangle Bloom to death. Sky reawakens and stabs Mandragora with Oritel's sword; with Bloom's Dragon Flame, destroying both her and the entire Obsidian Circle, freeing everyone. Sky explains he is now King of Eraklyon, and his coronation was the night he left Bloom at Alfea. With Domino restored to its former glory, Oritel is freed from stone, placing Miriam back in human form; Bloom's Enchantix is complete, and she is finally reunited with her birth parents.

There is a party afterwards where Oritel and Miriam promise Bloom that they will be around for the rest of her life. Mike and Vanessa are there too and Bloom hugs them affectionately. Oritel begins the traditional father-daughter dance, but lets Bloom dance with Sky, who proposes to her. Happier than ever, Bloom accepts and kiss him.

In the final scene before the credits, Bartelby appears by the Book of Fate, telling the audience that the prophecy has been fulfilled, Bloom is now a Guardian Fairy and there is a new Company of Light - the Winx. However, the Ancestral Witches have not been destroyed. Instead, they were freed with the destruction of the Obsidian Circle and are finding new hosts to take over and destroy the Winx. They are shown with their direct descendants, the Trix, cackling madly. This is a cliffhanger leading to the second movie.

All used DVDs have been refurbished and tested before shipping and should play fine on most machines.